This story actually begins many years ago when Cliff Roberts, of Ohio, booked his first archery elk hunt with us.  Cliff is a brick mason by trade and has hunted many times with us.  I hadn’t heard from him in a while and one day he calls me up to visit and tells me he’d been involved in a serious accident.  He was out riding his motor cycle and a car completely ran over him and his cycle.  He was seriously injured and lucky to be alive.  Sounded like his hunting days were over.  He eventually healed up and decided to come on a mountain lion hunt with us in January 2015.  He also brought his friend and hunting partner Clint Casper, also from Ohio.

Bare ground lion hunting is difficult enough with just one hunter, but with two, it adds a whole other dimension to the hunt.  Good friend and fellow lion hunter, Brandon Jones, assisted on their hunt and was invaluable in ensuring their success.

Mountain lion hunting can be a very grueling horseback type hunt, and these two guys lugged their compound bows for the entire hunt.  Clint collected his lion on the fourth day and Cliff got his on the last day of their seven day hunt.  It was a super exciting and action packed seven days!  I’d also like to brag just a tad and mention that all of our 2015 lion hunters went home with mountain lions this past season.

While Cliff and Clint were out here, they expressed interest in trying to archery elk hunt again.  I told them “Great! Here’s the hunt codes and my outfitter number.  Apply and we’ll see what happens.”  Sure enough being on a lucky role, they drew their tags and were back out here in September to bow elk hunt.

The first morning of the elk hunt, we had no sooner topped out of camp and we began hearing bulls bugling in the distance.  There were at least 3 or 4 bulls sounding off. After tying up the horses, we moved in as close as we could on foot.  We set up and began calling.  Clint’s bull came running in and he shot him at 7 yards.  Cliff’s bull took a little more coaxing and after about 30 minutes of continued calling, the bull presented Cliff with a 20 yard shot and he nailed it.  Two good archery bulls on the first morning and at the same time! 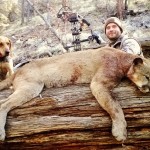 Clint Casper and his lion

Clint Casper and his bull 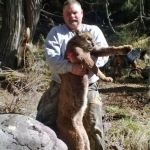 Cliff Roberts and his lion