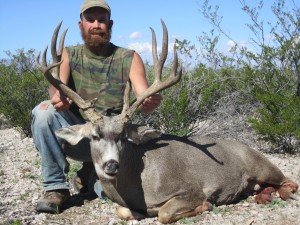 Dave Kleber, of Pennsylvania, collected this heavy antlered Desert Mule Deer on our early November rifle hunt.  It’s always fun when Dave comes out.  He’s been out here many times for elk, mountain lion and Coues deer, but this was Dave’s first time for mule deer. I knew he’d be up for whatever we needed to do and we’d have a great time.

Deer hunting usually means a lot of glassing.  Actually, glassing is probably the most used method of deer hunting there ever was and with good reason.  It’s successful.  But quite honestly for me, glassing can get old when you do it hour after hour, day after day.  So when the opportunity to track some bucks came up, I was eager to try.  I guess it was the lion hunter in me popping out.  I just wanted to trail something up.

Early one morning, Dave and I found fresh tracks of a bachelor group of mule deer bucks and began trailing.  I kept my eyes on the ground tracking while Dave looked out in front of us hoping to see the deer ahead of us.  Tracking was pretty easy through the sandy soil and flat terrain.  After about 2 miles, we were at the foothills of some desert mountains when Dave spotted the bucks.  They ranged at about 500 yards, with one of them being a wide 190 class buck.  They hadn’t seen us and although we had some shooting sticks, we decided we could get closer.  We never saw them again.

Early the next morning found us glassing the area they should have been in from the day before.  Guess what!  They weren’t there.  About mid morning we gave up and moved on to a new area to glass from.  I hadn’t even gotten my binoculars pulled from my pouch when Dave said, “I see one!”  He was about 3/4 of a mile away in the greasewood flat.  We watched him bed down and marked the spot the best we could. One greasewood looks just about the same as the next.  We stalked down to where we thought he was and never saw him jump up or slip away.  I left Dave standing there watching and I went back to find this buck’s tracks.  I found them and was trailing him behind where Dave and I had just walked and the buck stood up out of his bed.  We’d walked right by him about 30 feet and the deer never moved.

It worked out great!  We’d glassed and trailed up some really nice bucks and Dave collected a fine trophy.  Really a fun hunt!

Congratulations Dave and a great trophy!