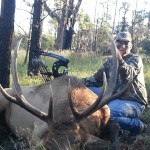 Time and again, I’ve seen many hunting clients reluctant to harvest an animal on the first day of their hunt.  Regardless of size, some hunters just don’t want their hunt to end that early.

I’ve had clients that have passed up 30 inch mule deer and 350 inch plus bulls simply because it was the first morning of the hunt.  I think this is especially true with archery elk hunters.  Expectations are usually high and many guys have watched lots of hunting videos with the guy blowing his call and a big bull just comes running in to commit suicide.  The truth is, it’s not that easy.  In reality, there is really only a handful of days during the season that elk behave like they do in the videos.

My motto has always been “Get them while the getting’s good”. That’s exactly what Walt Foster of California did on the first day of our third archery elk hunt here in the Gila.

I’d already packed in the camp for Walt’s hunt the week before.  We were busy hunting with some other clients in a different area during the middle season and I wanted to have as much of the work done as possible before Walt arrived.  It had rained every day for a week prior to Walt’s arrival and the ground was saturated and really boggy.  Traveling was difficult and many hunters during the middle hunt were stuck and couldn’t get out. Plus many hunters on the third hunt could’t get in.

Anyhow, with some difficulty Walt and I sloshed and bogged our way into our elk camp the afternoon before the season began. That evening we heard at least a 1/2 dozen bulls bugling around camp.  We sure were excited to hear them bugling the next morning too.  It was to wet and boggy to use the horses so we hunted on foot.

Walt shot his bull at 10 yards as he came running in hot, just like you see in the videos!  The sun hadn’t even made it over the hill and he’d already gotten his trophy. We made it through all the bogs with Walt’s gear and elk to the trailhead by late afternoon.

Next morning I headed back up to camp with a bunch of pack animals to hopefully get the camp out before it rained anymore. I didn’t really want to take anything down that afternoon just in case it rained, so decided to go see if I could find any of the other bulls we’d heard bugling.  I made a pretty good circle on foot, calling now and then and never saw an elk or even found any fresh sign.  The next morning while packing up I never heard anything either. Not a bugle one.

We may or may not have found some more hot bulls. I don’t know.  I really think Walt probably made the right choice and “got him while the getting was good”.

Congratulations Walt.  Your first bull is a dandy!