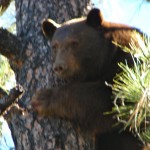 New Mexico’s 2011 bear season ended early after only a few short weeks.  New Mexico is currently under a quota system for bear management.  Although we do have season dates, our harvest limits are set by the New Mexico Game Commission for each region of the state.  When a region’s harvest limit is met, that area is closed to bear hunting and hunters must hunt in a different region.

In 2011 the entire state was closed to bear hunting after the first week in September. Most years, the quota will not be met until later in the fall or not at all.

We had a really dry year and the bear were having a hard time finding enough food sources.  Consequently during conditions such as this, bear will kill livestock and cause problems in rural communities by raiding gardens, garbage cans and destroying property trying to find something to eat.  Stock killers and nuisance bears are dispatched by the Game and Fish officials to combat the problems. These bear mortalities do count against the quota.  In many areas, the quota was already half met by the time the sport season opened.  I personally don’t think these bear mortalities should count against the sport quota, but they do.

If you’re thinking about bear hunting in New Mexico, schedule your hunt as early in the season as you possibly can.  I look forward to visiting with you and helping you plan your bear hunt here in New Mexico.