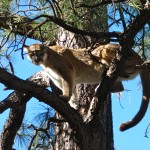 While I was out exercising my hounds and scouting for lion sign for an upcoming hunt, my hounds treed this adult female lion. After taking a few photos, I called the hounds off and left her sitting in the tree.

I was back in the same area about a week later, with a client, looking for a tom lion that was using the same country.  We ended up catching him and in the process found where the female lion had abandoned a mule deer buck she’d killed.  She’d quit her meal ticket and completely left the area.

It’s been my experience, that after being caught and released, most lions will leave the area. Eventually, they’ll come back, but it takes a while.

This is a photo of the mule deer buck the female lion had killed and then abandoned after being disturbed by my hounds treeing her. 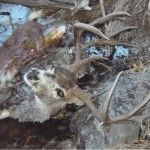