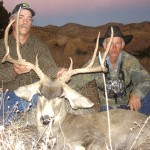 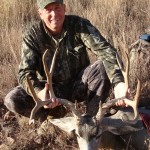 Jim Sides of North Carolina took this nice 4×4 buck on the second morning of our muzzleloader mule deer hunt. The bachelor group of 3 bucks fed to within 150 yards of us shortly before daylight.  Jim had plenty of time to choose which one he wanted.  Jim has also taken a Tom mountain lion with us on a previous hunt.  Congratulations on your nice mule deer Jim!

Dale Guthrie of North Carolina, Jim’s hunting partner, took his buck on the third evening.  We had spotted several bucks that morning working towards a shady hillside about 1/2 mile away.  We circled way around and found a good vantage point in the general area we had last seen 2 really nice bucks. As soon as we started glassing, we were spotting deer.  We saw numerous does and 10 or 12 bucks, but not the 2 we were looking for.  We stayed in the same spot glassing for hours and finally spotted one of the bucks bedded down about 350 yards.  I think he’d probably moved a little as the shade moved and we were finally able to spot him.

It was getting late and 350 yards was way out of muzzleloader range.  We decided to try a stalk.  Dale and I slipped up a draw staying out of sight and when we raised up about 150 yards from where he’d been laying, he was gone.  It was getting close to sunset, so we decided to walk over where he’d been bedded down and take a look.  The buck was up feeding and Dale took his trophy at 30 yards!  Dale has also taken a 6×6 bull elk with us.  Congratulations on your mule deer Dale!

Julie and I want to thank both Jim and Dale for hunting with us and look forward to hunting with them again in the future.