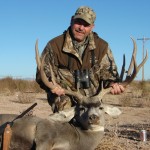 Chris Sherretts of Texas took this WHOOPER 32″ wide mule deer on the second morning of his hunt!

Chris was in an elevated stand on the edge of a wheat field just before daybreak.  We use these stands to spot deer and then we make a stalk on them.  Being just a few feet above the mesquite makes it a lot easier to spot deer and see where they’re traveling to.

There were numerous bucks and does leaving the field at daylight.  They were slowly making their way towards their favorite bedding areas.  This enormous buck was the last deer to leave the wheat and he took his sweet time working his way towards the mesquite beyond Chris’s stand.  This buck was on a path to come right by the stand and Chris sat tight.

Chris later said, “I had to look at something else for a while.   Between the cold and buck fever I had to focus on something else!  I was shaking like a leaf!”

After waiting a long long half hour, Chris took this buck a short distance from his stand.

Great job and congratulations on a magnificent trophy!!