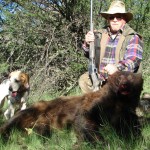 Here in southern New Mexico, black bears use a wide variety of habitats throughout the year.  These can range from the mesquite-prickly pear cactus covered desert mountains to the spruce-aspen alpine forests.  Available food sources will determine where bears might be during the year.  They can and will travel long distances in search of food.  Consequently, where you’re finding bears one month you might not find them there the next.  Such was the case when Wayne and Ron arrived in mid August for their horseback bear hunt with hounds.

Earlier in the summer, black bears were everywhere and they’d become a nuisance in local communities and on farms and ranches.  After our summer rains began, they dispersed back to the remote mountains and were in completely different country than they had been earlier in the summer, plus lingering rainy weather, 90 degree temperatures and plenty of evaporation of scent made hunting conditions tough.

Wayne and Ron’s hunt began by being rained out early on the first day.  Early on the second morning, the hounds started a bear track and were gone and out of hearing in only a few minutes.  We started working our way up a steep slope in the direction the hounds had gone and after a couple of miles began hearing them again.  My dogs weren’t together and were going in different  directions, which indicated they were after more than one bear.  We tried to stay within hearing of the closer bunch of hounds and they were soon barking treed in the bottom of a deep canyon.  Wayne’s bear was high up in a Ponderosa pine.  We had the bear skinned and were headed to the truck in a short time.

The next morning, Ron and I headed for the same area with a fresh bunch of hounds.  We thought we might find another bear and pick up the missing dogs as well. About the time we got to the place we’d last heard the missing dogs the day before, the fresh pack were raising cain on the next ridge over.  We could see a large cinnamon colored boar in the fork of a pinon tree, so we tied our horses a short ways away and stalked up close enough for Ron to get a good shot.  If you don’t stalk up to a treed bear, a lot of times they’ll come down out of the tree and take off.

Wasn’t long before we’d gathered up the hounds, our horses and Ron’s trophy and were headed back to the truck.  The rest of my missing hounds from the day before were there waiting at the truck and trailer for us.  It was a great hunt with both Wayne and Ron and I congratulate them on their trophies!