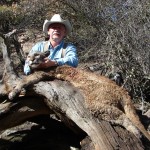 Chad White of Kansas took this Tom lion with his 357 handgun on the first day of his hunt.  We were fortunate with our catch, since January brought lots of rain and snow to the southwest and hunting was difficult.  I missed some hunting days due to really bad weather during January.

When I’m lion hunting, I often take our family dog, Kebler along.  He’s a Jagd terrier and weights about 20 pounds.  This breed of dog originated in Germany and has typical terrier traits.   Kebler usually stays close to me chasing rabbits and squirrels, while my hounds work at trailing and ignoring him.

On this particular morning, the hounds started trailing on ground that was frozen hard as a brick!  Our mules weren’t even leaving a visible track in the frozen mud.  Chad and I had no way to know if we were trailing in the right direction, so we left the hounds alone and followed as they worked the track.  They eventually trailed off into a rough little header.   Chad and I watched them work from a vantage point.  They tried to work the scent out of there in several directions and finally cold trailed up an open hillside to the top of the ridge.  We led our mules across the header and started working our way towards the hounds.

A few minutes later,  Kebler took off yapping after something below us.  I  figured he was after a deer or rabbit.  We kept riding towards the hounds when I could hear him barking like he was looking at something.  I told Chad to wait and I hiked off  towards the ruckus.  When I go within about 300 yards I could see he had a lion treed in a big Ponderosa pine.  The lion saw me and bailed out of the tree.  The fight was on!  A few minutes later, I could hear Kebler going over the ridge after the cat.

I hurried back to Chad, told him what happened and then went to get the hounds.  In a few minutes, we had all the hounds gathered up and started off towards where Kebler had been.  My hounds went squalling off in the same direction he had gone. Kebler had the lion treed again in a juniper a short ways away.  He kept him treed until the hounds got there.  When the cat fell out of the tree dead, Kebler meant to eat this lion up and we could hardly keep him off it.

The cat evidently had a kill in the header and had left tracks coming and going as he fed.  My hounds had done all the work trailing to get there, but our little house dog jumped and treed him by himself.

As you can guess, I took quiet a bit of ribbing about having my high powered lion dogs being bested by my little lap dog!! 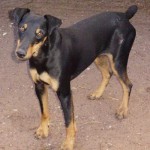