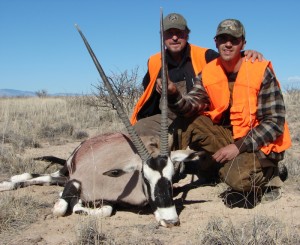 Anyone that has hunted very much is bound to have made a mistake while hunting, or at least witnessed one.  In my hunting career, I’ve had 2 clients accidently shoot 2 bull elk.  These were honest mistakes that could have happened to anyone.  In both instances, we packed both animals to the trailhead and called the New Mexico Department of Game and Fish.  We could have easily walked away from the second bull and nobody would have ever know.  In each case,  the game warden wrote the hunter a warning ticket for exceeding the bag limit, told him to be more careful and let him keep one of the bulls.

I was recently reminded of this situation while on a New Mexico oryx hunt on White Sands Missile Range.  I had been invited to tag along with client and friend Dan Herman of Colorado on his oryx hunt.  I’m not an oryx guide and on the Rhodes Canyon hunt only a very inexperienced hunter would need one. Oryx were everywhere.  These African antelope were released on the missile range in the 1970’s.  Approximately 90 animals were released by the New Mexico Department of Game an Fish.  The population is now estimated to be about 3000 animals.

Dan had already decided that he would take any respectable animal.  He thought, “This is only a 2 day hunt, there are a lot of hunters around and bulls and cows are difficult to tell apart.”

Late the first morning, Dan and his son Matt stalked to within 300 yards of a herd of about 20 oryx.  I was about 75 yards behind them watching.  Dan carefully picked out an animal with good horns and shot.  The herd went loping off to our right.  One animal went slowly meandering off to our left.  After a few seconds, Dan settled the crosshairs on the lone animal and fired a second shot.  We all saw the animal go down.  When we approached the animal, we noticed he was a nice bull, but with one broken horn.  Dan immediately said, “This is not the same animal.  I shot at one with 2 full horns the first time.”  We went back to where the herd was and sure enough there was a downed female with a full set of horns.

Dan called the New Mexico Game and Fish with his cell phone and a warden was on his way to investigate.  The game warden handled this situation in the same manner as my elk hunters that accidently shot two animals.  Dan kept the cow and the Game and Fish sold the bull to another hunter.

I still believe honesty is always the best policy.  Thanks for the invite Dan.