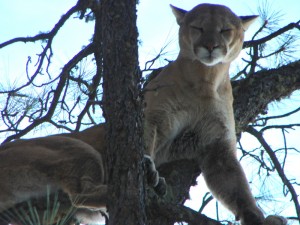 While out exercising the hounds, they treed this magnificent tom overlooking the Gila River.  It took me a while to find the track after the dogs started trailing. I finally did find it and confirmed that they were going the right way.  I stayed with them until the terrain got to rough then I had to leave them and go around a different way.  When I caught back up, the hounds were looking at this big ol’ tom.  I caught the dogs and left him there.

I returned the following day to where he had been treed and the hounds started trailing him again.  They were going at a pretty good pace.  We were headed further down towards the Gila River and the country was getting rougher and rougher with each step.  The dogs jumped him out of some bluffs not to far out of the river bottom and ran him into some even bigger bluffs about 1/2 mile away.  That’s where we left him!