Tom and Female Lion Together 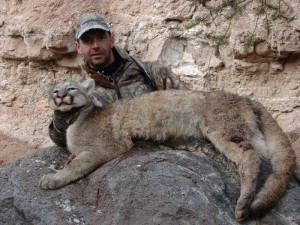 John Novellino of New York, took this mountain lion on the second morning of his hunt.  We were about 30 minutes from the truck and trailer when the hounds had her treed.

We skinned the lion and were headed to the truck when I noticed 2 of my hounds were missing.  I knew they were with us at the tree when John shot his lion, but now they were long gone.  I put the other hounds in the trailer and John waited at the truck while I went to find the them.  With the help of the telementry collars, I found the other dogs with a second lion treed about a mile further on.

At the time, we hadn’t realized that the female was running with a tom.  It’s not uncommon to find toms and females running together, especially in March and April.  I took this photo, gathered up my hounds and left him sitting in the tree.  Great hunting day!! 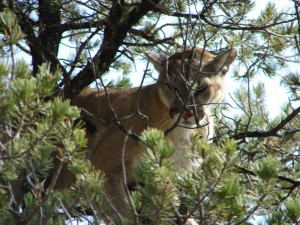 The next day I went back to where I’d left him in the tree.  The hounds trailed him back to where he and the female had killed a deer, then trailed him across the Middle Fork of the Gila River.  The dogs were going pretty good on the track when it started raining.  In a matter of minutes, the scent was wiped out and that ended the hunting for that day.