Tom Lion On Day One 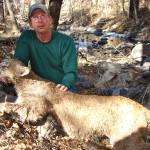 Johnny Hull of North Carolina took this nice tom lion on the first day of his hunt.

The morning began with my mule slipping on an icy patch and falling down.  When he fell he landed on my leg and foot and broke a bone in the top of my foot.  I couldn’t walk, but was able to ride, so we continued up the canyon hoping the dogs would cut a lion track.  After a short while, they started trailing and it was now our job to determine the direction of the track.

Luckily, lion hunting friend Avery Hurt was along on the hunt and he was able to walk with the hounds looking for the track.  We never could really determine the direction the lion was traveling, so we just let the dogs do their job.  They trailed off into a huge canyon and finally jumped the lion and he treed in a small juniper tree.

During the ordeal the lion got a hold of two dogs.  Keebler, our Jagd Terrier was bitten in the head and side.  Both of his eyes were swollen shut for several days.  But with rest and treatment he made a full recovery.  The other dog was “Hobo”, one of my hounds.  He had a gash on his side and one of the lion’s claws was broken off and stuck in the skin above his eye.  He also made a full recovery.

It was a very eventful hunt and we congratulate Johnny on his trophy!!