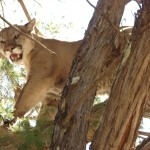 With all my guided lion hunts completed, myself and friend Brandon Jones took some of our hounds for a final hunt on the last day of March.  After about an hour of riding, the hounds started a track.  There was a small patch of dirt where they started and we were able to find a small female track and had the dogs headed in the right direction.  After trailing about a 1/2 mile, I discovered that a tom lion was with the female.  The hounds went out of hearing and had one of the lions treed in the bottom of a big canyon.  Evidently he was a runner and was still panting when we arrived under the tree an 1 1/2 hours later.  We took a few pictures, called the hounds off and left him sitting in the tree.

During the race, one of my knives came off my belt and I ended up going back to look for it 3 days later.  I started my search where we first started the female’s track.  The tom lion we’d let go had come back through that night.  His track was in exactly the same spot as the female’s had been and he was going in the same direction.  We’d obviously not disturbed him to much and he didn’t leave the country as many will do after being treed.  He was definitely intent on finding his girlfriend and was trying to trail her up.  Lions do use scenting to find mates and to trail up prey, but I don’t know to what extent.

We had a great season this year and ended 2011 on a terrific note!!