Many many thanks to the Pannkuk family!  Back in January EB Pannkuk came to New Mexico for a guided mountain lion hunt.  He was accompanied by his father, also named EB Pannkuk.  He is actually the fourth generation of this family that I have guided on western big game hunts.  As crazy as it sounds, what this means is I’ve guided him, his dad, granddad, and great granddad on various hunts.  The interesting this is that they all go by the same first name of EB, which definitely makes remembering someone’s name very easy.  My wife, Julie asked them “How do you keep everybody straight when you all have the same name? And how do you know who someone’s speaking to?”  We were informed that it’s all in the “tone of voice”.  Makes perfect sense!  Along with all the EB’s, we’ve taken many other Pannkuk family members on hunts.  Mostly lion and bear hunts, but also deer and elk hunts.  I have many fond memories and had some great adventures with them.  What a great family!!

Getting back to EB’s mountain lion hunt.   It started off slow!  After not finding much in four days, we decided to try a new spot.  After about a two hour ride on our 5th hunting day, the hounds started trailing a mountain lion.  I spent a considerable amount of time looking and was finally able to determine that the hounds were trailing a nice tom, but in the wrong direction. Meaning we were going in the direction he’d come from instead of in the direction he was going.  We managed to get them called off and took them back to where we’d started the track.  To our surprise, the dogs just couldn’t trail it in the right direction.  I spent a lot of time walking with the hounds, slowly circling the area I thought the lion might have gone.  The dogs couldn’t find anything.

We then tried riding in the general direction I thought this tom had to have gone.  We still found nothing.  Sometime during all of this, I discovered that two of my dogs were missing.  We rode to the top of the ridge hoping to get a signal on them with the telemetry equipment.  We did get a signal and all though we couldn’t hear them, I was pretty sure they had something treed about a mile and half away.  We started riding that direction and as we got a little closer, the hounds that were with us started trailing in that same direction.  I eventually saw the tom’s track again and knew we were going in the right direction this time.  As we got close, I could tell that the dogs were treed in 2 different spots about 300 yards from each other.  We eventually had to tie up our mules and go on foot as there was some really treacherous frozen mud.  We found ourselves sliding on our backsides to get off in the canyon.  As we got close, I could see a lion in one of the trees and all the hounds barking treed, except one.

I told the EB’s to go get under the tree with the lion and I was going to go see about the other dog off by himself with the other lion.  I told the guys if the lion looked like it was going to jump out of the tree that they’d better go ahead and shoot it.  When I got to the other tree, my dog “Boone” was hanging by his hips about 6 feet off the ground in the fork of a big pine tree.  The lion had already bailed out of the tree and I knew my dog was hurt so I quickly went to get him unstuck.  Like a dummy, I went to his head and tried to lift him out of the fork.  I must’ve hurt him in the process and he bit me right in the face.  Me and my bloody face quickly went around the other side and I got him by the tail and lifted his hindquarters until he was free.  He hit the ground pretty hard and couldn’t move.  I was really afraid he’d broken his back or damaged his hips since he couldn’t get up and on his feet.

Right about then, I heard a rifle crack and then heard all my dogs running, so I knew EB had to take a shot.  To make a long story short EB collected a nice female lion, but the tom got away.  Two of the dogs were bit and scratched up by one of the lions and I was sure “Boone” was seriously hurt with a broken back.  To my surprise, by the time we finished skinning the lion, Boone was on his feet and able to move a little bit.  By the time we walked back to the mules, he was walking pretty good.  All of the dogs recovered just fine and were good in just a few days.  It was dark thirty by the time we got back to the truck that night.

This hunt will be added to all the other great memories I have of hunting with the Pannkuks!  Thanks to all of you! 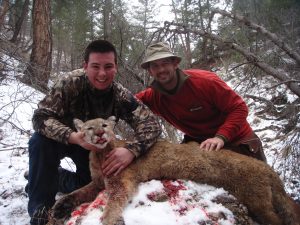 EB Pannkuk with his dad and his 2016 trophy lion 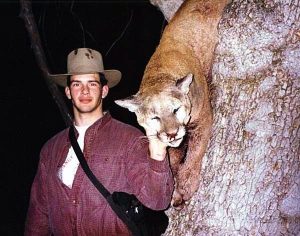 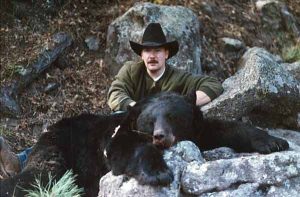