Hat’s off and many thanks to the Leicher family.  Carl Leicher, SR. was the first client I ever guided on an elk hunt almost 32 years ago.  He’s been on numerous hunts, too many to mention since that first elk hunt.

His most recent hunt was this past fall for archery elk.  His son Carl JR. (aka Tiger) and friend Jeff Washburn accompanied him.  Tiger has also hunted with us many many times and is always a pleasure to have in camp and to hunt with.  Carl and I always joke about how many more times I will be able to beat him up dragging him through this rugged Gila Wilderness.  Not sure which one of us will be the last man standing!! (I think it will be me)  Carl has a great attitude and always makes even the most unpleasant situation fun.

I’ve never really like using the Senior and Junior thing so I’ll refer to them as “old” Carl and “young” Carl.  “Old” Carl did not get his bull this season and as you can see in the photo below, “Young” Carl did.  “Old” Carl promised half the state of Pennsylvania elk meat when he returned, so I’ll be interested to find out how that worked out for him.

Many many thanks Leichers.  Can’t wait for the next one! 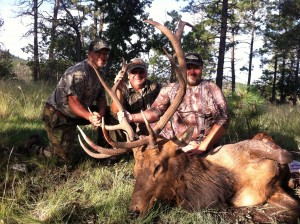