THE SHORTEST BOW ELK HUNT EVER

As I’ve often said many times “Preparation is the key to a successful hunting trip”.  In fact, being prepared is the key to being successful at almost anything we do in life. Such was the case for Gary Sommer and his sons, Tommy and Logan.

I had done a lot of scouting and had already packed the camp in prior to Gary and his sons’ arrival.  In fact, the day before they came, I’d packed in three more mule loads of water and horse feed.  So the day before their hunt starts, we pack up Gary and his sons’ gear and two more loads of ice chests with the fresh groceries and head to camp.  Everyone pitched in getting stuff unloaded and set up and we were pretty much done by mid-afternoon.

It was a really warm day, so I suggested to Gary that he might want to go sit at the dirt tank a short distance from our camp where we water our horses.  He thought that sounded like a pretty good idea so he and Logan went down to the tank while the rest of us gathered firewood and did things around camp.  About an hour before dark while we were just finishing up feeding the horses, I looked up and there’s Gary.  I was surprised to see him back so early and it must of shown with the expression on my face.  He quickly said “It’s to ——- ——– hot to hunt elk!”  He said “You can’t hunt elk in this dang heat!”  I didn’t know how to reply to that and I must of had a frustrated look on my face.  Gary started laughing hysterically and quickly informed us he’d shot a really nice bull at the tank a few minutes ago.

We all went down and took care of his bull and early the next morning packed it up and all their gear, the perishable groceries that we’d just pack in and headed for the trailhead.  I would return later to get everything else packed out.

Congratulations Gary!   The next one might not be so easy!!

Thanks for hunting with us. 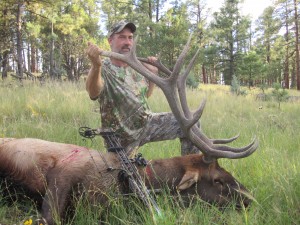